December 24, 2020 by Dennis Williams No Comments 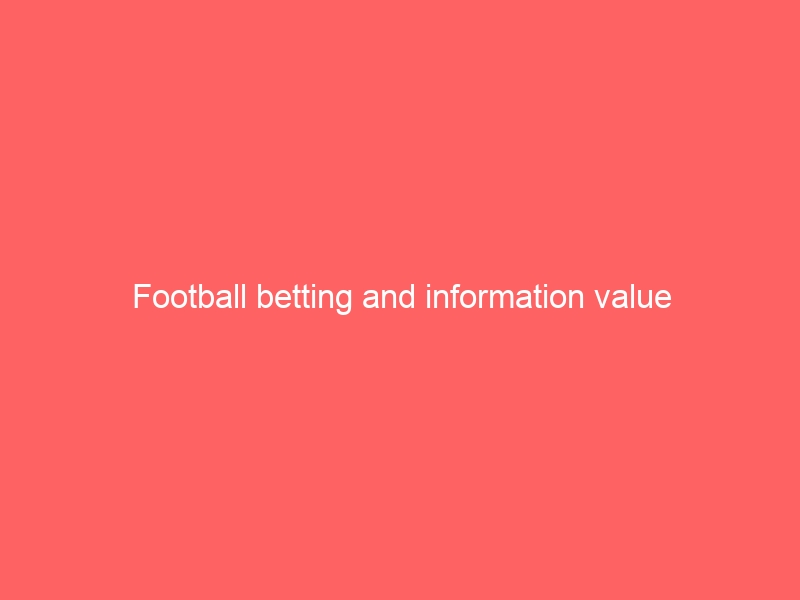 This article was originally published at https://www.pinnacle.com/no/betting-articles/Betting-Strategy/why-information-is-more-important-than-betting-tips/4JN2TV54T54NDXSQ

The value of information in football betting

Knowing something before everyone else knows it is one of the keys to successful betting. Instead of just relying on betting tips, smart betting players will gather as much relevant data as possible, analyze the effect this may have on the market and use the results to bet smart. When new or previously unknown information appears, it can have a major effect on the football betting markets, and thus also affect how you should bet money.

The difference between tips and information

Factors such as low margins and high stakes limits are important for betting players, but such things can still become useless if you lack the right information. Betting players who have access to relevant and (even more importantly) precise information, and who can act on this before others have time to do so, will be richly rewarded. When the information becomes publicly available, bookmakers have already adjusted their odds.

Information will not necessarily tell you who will be the winner and should be bet on, but will help you consistently beat the final odds. In other words, the smallest details that can give a clue as to how a team or athlete can perform in a football match are critically important if you want odds that provide the best possible value.

A fact about an upcoming football match can go from being the latest news to being widely known in an instant.

Football betting players have access to various sources of information, ranging from digital streams to contacts with inside information. When it comes to football betting, these sources can provide insight into news about teams, coaches’ plans for the next game or even more unusual things like a team threatening to strike due to disagreements over pay.

Football bookmakers may have in-depth knowledge of the sport, but in most cases they give their advice only based on subjective opinions. Some betting tips may boast an impressive history of accurate predictions, but there are always elements of luck and survival bias in their results.

Fact information is exactly what it sounds like: facts. The fact that an upcoming football match can go from being the latest news to the old news in just a moment, but if you are the first to know things that no one else knows, it gives an advantage as a tipper.

A person who offers betting tips can correctly predict that team A will beat team B because their match history shows that team A has done better in the past and team B is considered to be in bad shape at the moment. A smart tipper, on the other hand, can find value in the odds on team B by betting on them the day before the match, after finding out that the best player on team A was injured in training.

How can betting players benefit from information?

There are several examples this season that betting players can benefit from getting information before anyone else:

When Manchester United qualified in their Europa League group with two games left, people began to speculate that Ole Gunnar Solskjær’s team would use the opportunity to let the first team rest and let selected players from the youth team get practice during the meeting against FC Astana.

The potential gain from a € 100 bet on FC Astana to win fell to less than half.
These speculations were confirmed when Solskjær stated two days before the match that “a few” players from the youth team would attend the press conference before the match, and United published the player list for the upcoming away match. This confirmed that a number of youth players would play in the match, while several of the members of the first team would stand over the trip to Kazakhstan.

Earlier in the season, Barcelona played a league match away against Granada. Ernesto Valverde had given some hints that B

arcelona had to make changes in the team, and the match took place during a busy period. Barcelona had visited Borussia Dortmund for a Champions League match three days earlier, and they were to play another league match against Villarreal three days later.

When the line-up was published, it turned out surprisingly enough that Lionel Messi would start the match on the bench for Barcelona, ​​and that they also sent out what most people considered a second-rate defensive line.

When Liverpool were drawn against Chelsea in the fifth round of this season’s FA Cup, there was uncertainty about the strength of the team Jürgen Klopp would field. In the previous two rounds, against Everton and Shrewsbury Town, Liverpool sent out teams with a high proportion of youth players, but it was uncertain whether this trend would continue against a stronger opponent such as Chelsea.

Two betting players who placed the same bet at different times had been given very different odds.
On the night of the match, a picture circulated online that most of the first team to Liverpool went for a walk together in a park in London, which clearly implied that Klopp would pose with a relatively strong team.

The point here is not what the result was in these matches (although it is worth noting that both FC Astana and Granada won their matches), but the fact that two betting players who placed bets in the same market, got completely different odds depending on when the bets were placed.

If a betting player knew of Solskjær’s plan to field more youth players before the bookmaker did, and reacted quickly, it would have given significantly better value for money than one would get if one bet money after the press conference was held and the team line-up was published.

Identify information that cannot be obtained via football betting tips
These examples show that getting team information before everyone else does, is perhaps the most common way to gain benefits as a tipper. However, there are also several other types of information, especially about off-field conditions that can affect the results, which can be even more useful in football betting.

This can often happen in the lower leagues of a country. An important example occurred in October 2012, when the team at Kettering Town had come up with an ultimatum related to unpaid salaries during a period when the team was struggling financially. Most bookmakers (and bookmakers) were not aware of this.

Betting on a corner kick in football: How to find value in a lesser-known market
In the end, Kettering fielded only ten players in their next Southern Premier League match against Bashley, and then lost the match, not particularly surprisingly, 7-0.

It was impossible to predict this result based on Kettering’s recent form of play, so betting players who knew about the pay dispute and the ultimatum could take advantage of the odds on Bashley because they knew the team would likely have a huge advantage in the match.

The rise of social media over the last decade has led to football betting players today having access to more information and news in real time than ever before. This has also contributed to the emergence of betting tips in football, who all claim to have important information.

Read: Find the benefits of betting on cards in local football tournaments

Unfortunately, it is generally very difficult to confirm how credible and reliable the source of this information actually is. It could simply be tipping tips trying to attract more visitors to their sites, or a modern version of the whisper game with unreliable information. The fact is that there is significantly more false and unreliable information than accurate and useful information out there.

It can pay to react quickly to “leaked” information before others have time to do so, but it can also be punished if it turns out that the information is incorrect. If you are going to bet large sums on football matches, it is at least as important to rely on reliable sources as you can trust to come with the right information.

We use cookies on our website to give you the most relevant experience by remembering your preferences and repeat visits. By clicking “Accept”, you consent to the use of ALL the cookies.
Cookie settingsACCEPT
Manage consent

This website uses cookies to improve your experience while you navigate through the website. Out of these, the cookies that are categorized as necessary are stored on your browser as they are essential for the working of basic functionalities of the website. We also use third-party cookies that help us analyze and understand how you use this website. These cookies will be stored in your browser only with your consent. You also have the option to opt-out of these cookies. But opting out of some of these cookies may affect your browsing experience.
Necessary Always Enabled
Necessary cookies are absolutely essential for the website to function properly. This category only includes cookies that ensures basic functionalities and security features of the website. These cookies do not store any personal information.
Non-necessary
Any cookies that may not be particularly necessary for the website to function and is used specifically to collect user personal data via analytics, ads, other embedded contents are termed as non-necessary cookies. It is mandatory to procure user consent prior to running these cookies on your website.
SAVE & ACCEPT